I am an idea man.  If nothing else, I can come up with great ideas, names and concepts.  I do this to remain creative, for nothing is worse than the boredom that comes from lack of creativity .  I think this is why I was attracted to jazz because of high level of creativity that comes from improvisation.  I love that you can never play the same solo twice.  It’s supreme self-entertainment, which is why I’d be cool playing the sax even if no one else ever heard it!  I often say, it’s great therapy.  All the different group concepts I’ve come up with over the years: DFQ~Dale Fielder Quartet or Quintet, Duos, Nonets, Group/Force, Angel City Quartet, Sonic Rewind, Clarion Prime, Signature Jazz Quartet: on and on is due to a constant need to create something new in my personal experience that hasn’t existed quite in the same way before.  For me it is heresy to rest on your laurels as they say.

So with all this forward looking agenda, why would I put out a CD that is a throw back to the Donald Byrd/Pepper Adams Quintet of 1958-1961?  The answer, at least for me, is to move forward, one must assimilate the past.  Otherwise what you build in the future will be fleeting because it lacks a firm foundation.  I often think of John Coltrane and what made him so unique.  It was that he mastered what came before him first.  He was a master bop player who mastered the rules first so that he had the best ideas of how to break them.  The unfortunate fact of learning jazz today is that it is primarily learned in school in an structured technical manner.  This is problematic for an intuitive artform that had traditionally been learned through osmosis and through master/disciple apprenticeships.  With today’s unprecedented learning resources, today’s saxophonists have master Coltrane, -even note for note, but wonder why they aren’t even close to sounding like him or their impact isn’t the same as Trane’s.  My theory is only those who did as Trane and was FIRST a bebop master had any impact, ie. Wayne Shorter, Joe Henderson, Charles Lloyd etc.

In 2013, we now live in a ‘quick get rich’ society built on total selfishness that fosters an attitude that says: “Let’s succeed while the going’s good and get out before it crashes”.  Success in music is now measured in how much money you make and the ‘simpler’ the music like any kind of dance music or smooth jazz etc. is what makes the most money.  Certainly not mastering and playing bebop.  And so we build things and create music that doesn’t last and have come to believe this is normal and is just how it is.  How many artists have come out in recent years to much fanfare only to be forgotten 2 or 3 years later?  How many jazz clubs have you seen that are here one day and gone the next?  We’ve developed a belief that success is short-termed, for nothing can last forever.  Certainly something good if at all.  And in music, jazz in particular, the lasting, timeless music is not created in the current era, for the long-lasting stuff was created in the earlier eras.  We now have several generations of musical artists who create this way: creating musical success for the moment, not because they’re focused in the present (which is actually alright), but because the musical economy, the music business and associate powers-that-be, will not tolerate anything else.  I am proud of the fact that every one of my 14 CDs from 1992 on still sound fresh, current and relevant.

I am really proud of my new CD by the Tribute Quintet.  It is entitled, “Each Time I Think of You” on the Clarion Jazz Label.  I had originally conceived of the project back in December of 2010 and began work on transcribing all of the compositions and working out the arrangements.  I selected my long-time musical partners Jane Getz on piano, Trevor Ware on bass, Don Littleton on drums and Nolan Shaheed on trumpet.  After initial rehearsals, we test ran our project on our first gig at the venerable World Stage in the Leimert Park section of Los Angeles on March 26, 2011.  You can hear a private recording of that memorable night on my http://www.dalefielderactivities.com website at: http://www.dalefielderactivities.com/#!music  You can hear the electricity in the air and the crowd going wild, talking back to us and spurring us on!  It completely blew our minds as well as our audiences’ on how good this band actually sounded.  It was supreme fulfillment for me because it sounded the way I had heard only in my head from the previous December; -to actually hear this sound move out of my head into the world, was supremely fulfilling!  After that gig, we all looked at each other and said, “Uh-oh!  We got something here!”  Unfortunately I was unable to use my guys and gal for the big concert at Lincoln Park Performing Art Center in April of 2011 in Midland, Pennsylvania because of logistics and I had to use east coast guys: Jamie Moore on trumpet, Eric Johnson on guitar, Dave Budway on piano, Paul Thompson on bass and Tom Wendt on drums.  They too were smokin’!  It truly was Byrd’s and Pepper’s music that trumped all the challenges and an outstanding concert was captured for all time in videos of “Out of This World” http://youtu.be/hhzFrE5FMK0 and “Each Time I Think of You” http://youtu.be/l-WEmRxm7H0 which you can now see on YouTube.  Back in LA, the DFTQ continued to do a variety of local gigs and finally the big day came for us to go into Nolan’s studio and record our CD.  We knew we were ready, and every cut except the title cut was done pretty much in one take.  We did 3 takes of “Each Time I Think of You” and each take was better than the last!  They were so good that we decided to release Take 2 as the master and Take 3 as the alternate take.  This band continued to perform at venues such as the Howard Hughes Center, LACMA where the entire 2 hour performance was recorded and broadcast over NPR radio with interviews.  Our CD release was at the Crowne Plaza and we also did a phenomenal concert at Soka Performing Art Center where we taped our first video of this wonderful band.  You can view 5 tunes from the performance at this link:

Well, for me I guess I’ve become a sort of anachronism, -a man out of time.  And am proud of it.  If nothing else, I have stayed true to the path and mission I first stepped out on when I began playing jazz music professionally at age 19 back in 1975 when the great master jazz drummer Joe Harris called me to sub for his regular saxophonist.  For me, mastering bop first will provide the foundation for me to move beyond and hopefully discover something new that has never been played before in jazz.  That’s my hope and vision.  There are others out here who have accomplished that, -Vijay Iyer, Geri Allen, Steve Coleman and Greg Osby comes to mind and there are many others.  But I guarantee you, to the last person, they are also bop masters.  I can only work on mastering bop when I have the opportunities to perform it.  In the old days, these things were worked out in the jam sessions.  The more opportunities I have to play, the better I get at it.  And the opportunities to do so are extremely limited.  This more than anything is perhaps the main reason for my Donald Byrd/Pepper Adams Project.  Without sessions to go to as in the old days, we are forced to create our own situations as its hard to simply just get a simple booking.  We have to have an angle or hype of some sort these days.  Choosing the Donald Byrd/Pepper Adams material was absolutely perfect for me, especially as a baritone saxophonist.

The Donald Byrd/Pepper Adams Quintet of 1958-1961 was one of the great unsung groups in jazz history. Over shadowed by a golden age of great jazz groups, they were a favorite of musicians and fans alike. Donald Byrd and Pepper Adams were each a product of the fertile Detroit jazz scene of the late 1940s and early 1950s.

They were the right musicians at the right time when they arrived in New York in the mid fifties, particularly in the rapidly expanding realm of jazz recording that was spurred by the new 12-inch, 33 1/3 rpm long-playing record. They were each in demand and heard frequently on numerous historical recordings that influenced the next generation of jazz trumpeters and saxophonists. Finally in 1958, they decided to consolidate their partnership by co-leading a jazz quintet and began touring the country non-stop for the next three years as well as documenting their partnership on landmark recordings. They recorded a number of timeless jazz albums and contributed a number of new jazz standards to the jazz canon as well as discovering and introducing to the world two great pianist/composers: the great Herbie Hancock and Duke Pearson. Pepper Adams succumbed to cancer in 1986 while Dr. Donald Byrd attained his doctorate and had been currently teaching at Delaware State University before passing away in February 2013. It has truly been my honor to perform these classic jazz pieces and bring them back to life as our way of paying homage to one of the great partnerships in jazz. 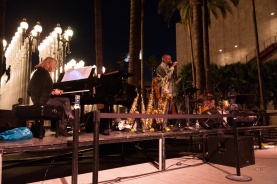 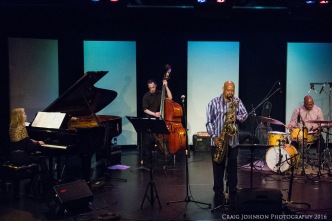