Here are 2 videos of our performance of “Dylan’s Delight” at Billy Higgins’ The World Stage in Leimert Park, Los Angeles, CA on the night of Oct 22, 2016.

Video #1: My personal/documentary video from my Zoom Q4

Video #1 is from my personal/documentary video collection recorded on my trusty Zoom Q4 audio/video cam, which has the more superior audio and video quality of the two cameras in use filming the performance. Video #2 is from Bob Tucker’s Zoom Q3 Handy Recorder that he used to podcast the entire tune on Facebook-Live that night as we performed it!  (Gotta love those Zoom cameras and recorders!)  We are so appreciative of Bob coming out and doing this as well as sitting in and playing some boss guitar with us along with vocalist Rita Edmond. Bob is a Grammy Award-winning engineer who we had the fortune of having as our engineer on our new “RESILIENCE!” 2-disc CD.  This was our first ever live podcast and as of this date has 687 views. Not bad for the first time out.  Way to go Bob!  On my video, Video #1, you can see Bob actually filming the podcast on the left and can even see his camera screen as he is streaming it live!  I think that’s kinda cool and trippy!

The composition “Dylan’s Delight” was written by the late great Pepper Adams for his son.  It is recorded live in performance by us, the DFQ~Dale Fielder Quartet:  Dale Fielder-baritone sax, with Jane Getz-piano, Bill Markus-bass and Thomas White-drums.  As you know, we just finished celebrating our 20th Anniversary and 20th Anniversary CD RESILIENCE!  Playing this tune truly takes us back to our Hard-Bop roots when we first came together and played all those nights at 5th Street Dicks as well as The World Stage twenty years ago.  It was really fulfilling to come back and perform at ‘the Stage’ in their new location before a small but appreciative audience.  Pepper Adams’ tune is a real swinger!  Now as primarily a baritone saxophonist, I find myself coming back and including many of Pepper Adam’s tunes in my repertoire pretty much at every performance.  His tunes are very tailor-made for the baritone sax, -everything lays just right.  Who else better to write for the baritone sax than Pepper Adams who besides being historically one of jazz’s greatest baritone saxophonists, is quite an accomplished composer as well.  His tunes are consistently interesting to play, challenging with some MEAT in them!  Hope you enjoy listening.  If you do, please “like” it on YouTube.  It really helps! 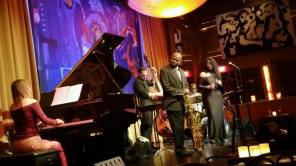 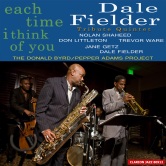