Once upon a time, I was doing a performance and was recording, videotaping and photo shooting it.  I overheard a friend’s girlfriend exclaim, “Who does he think he is?  Why is he always documenting his gigs all the time? All these cameras and equipment in the way!  Who does he think he is!  He’s not that important!”  This right here is an example of what we as light bearers are dealing with in our society.  It is my mission through music to help to heal this type of distortion.  We’ve become so jaded and cynical.  As a people, we’ve become so heart-broken.  We’ve been let down so many times that it’s just hard to be otherwise because we see so little positivity in our world.  We trust cynicism as though it’s wisdom, the voice of “experience” instead of embitterment.”  But what it’s done is place negativity as our default experience to the point that when we are face to face with genuine positivity in our world, we can’t easily open to it and instead, instinctively reject it.  Thus, we don’t see it nor be moved by it, even when it’s all around us.

As I mentioned, I see my role as a musician is to be a healer to help heal human consciousness through the use of manipulating sound and vibration.  As John Coltrane said, ‘to bring back that joyous feeling’ anytime we play our music.  One of the things I am most proud of is all of my life I have held true to that design.  I’ve learned that when you give yourself completely to the music, in essence stepping outside of your human self and concerns, the music will never let you down.  When we perform, my objective is to lift the vibration in the room and affect the listeners’ consciousness in a positive and beneficial way.  To accomplish that, first I have to make that a reality inside myself.  How will the listener feel any positive vibration if I’m not feeling it first?  And I think that the small audience I have managed to build is a result of being successful in that design.  My audience knows that I am always going to give my all to them every time I play. Never coasting or dialing it in.  Even when I fall short, they can say “Man did he flop! But he sure tried!”  But more importantly, they see my enthusiasm and love of music making.

So I do feel that we are doing important work in lifting people’s consciousness through our music.  No tricks, no politics, no gimmicks.  To me, that’s worth documenting.  But to be honest, I am primarily documenting for personal reasons; to learn and study what we are doing to look for ways to improve on it.

Besides, if I don’t do it, who will?  Because I am not playing music with the goal of becoming rich and famous, I’m largely ignored in the so-called ‘music business’.  And it’s unfortunate that in today’s culture, the average person is not interested in musicians who simply make great music yet do so in obscurity. But thankfully there as still many people on the planet still interested in finding those obscure, pure-hearted artists because that’s where real musical inspiration seems to be today.  These people find that they are not moved by the music of those big-name artists who are rich and famous, finding their music formatted and lacking true substance.  These people want to be moved by music and will seek it out.

Such was the case, on Saturday afternoon February 24, 2018, at the Katy Geissert Civic Center Library.  California is generally a difficult place to attract an audience for jazz even when it’s free to the public!  Trust me on that!  Imagine our surprise when about 80 to almost 100 folks showed up this afternoon!  This was a really good situation because there is nothing like playing for an audience that is totally receptive to what you are laying down.  This was a very enjoyable concert for us and I think we performed very well.  I hope you enjoy viewing these four videos from that concert.  These are not in the order we played them. 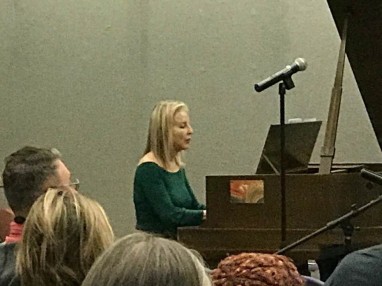 “In The Moment” is a brand new tune that we’ve never played before.  I wrote it sometime last year and forgot about it.  But being inspired by the way the concert was going, I was moved to pull it out and Jane, Bill, and Thomas ran it down cold!  “Profane”, our commentary on the current state of American politics, has lately become a favorite of ours and our audiences alike.  “Periphery [for Geri]” was written last December 2017, when I was working on the CD “Scene From A Dream” which featured Geri Allen on piano.   And “Consensus” is a brand new tune just written in January 2018.  Unfortunately, an audience member bumped the camera when we began which cuts Jane out of the video.  However, my wife Patricia, somehow walked over to check the camera and noticed this and corrected it somewhere around the 5: 17-minute mark!  Too bad because Jane solos first and did a great solo!  Hope you enjoy! 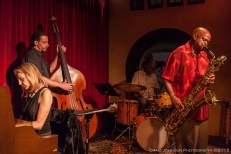 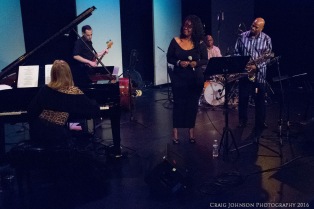